Everything new in the next Minecraft updates

On October 3rd, 2020, Mojang Studios had a live streaming event to announce their new items, mobs, gameplay, etc. It was actually rather impressive. Over the next few days, weeks and months I am sure we will get more details, updated wiki pages, new Youtube content, but this is what we know for now.

FOUND OUT SOMETHING NEW? POST IT TO THIS THREAD!

The community was able to have two voting rounds to show their love for a new mob, moobloom, squid and the chillager (as I like to call it). In both rounds, the glowing squid won.
https://minecraft.gamepedia.com/Minecraft_Earth:Glow_Squid


On the 1MB Discord our friend and community helper the456gamer was awesome enough to create a hangout for us all to live chat in, he was streaming the https://www.twitch.tv/minecraft live event so we could discuss it as a community. Thumbsup!

The next Minecraft update is: The Caves and Cliffs update!!
https://minecraft.gamepedia.com/Caves_&_Cliffs

Below is a list of things that are included in the caves and cliffs update, and it's a lot.

Underground biomes aren’t all terrifying lava lakes and skeleton-infested mines; instead – if you follow the roots – you’ll find the lush caves are a stunning oasis of calm and tranquillity.
https://minecraft.gamepedia.com/Biome#Temperate.2Flush_biomes

The sculk sensor block is activated by movement and vibrations – emitting a redstone signal when charged. Found underground, its uses can include automatic lights, wireless firework detonators and attracting unwanted attention.

Down in the deep dark, every moving limb, every opened chest or every thrown snowball can be sensed by this terrifying new mob: the Warden! You can try running away… Oh, but they’ll sense that movement too!
https://minecraft.gamepedia.com/Caves_&_Cliffs

Release your inner geologist and harvest crystal shards. These crystals aren’t only pretty, they’re also the key to a new crafting recipe, but first and foremost they’re pretty – so very pretty!
https://minecraft.gamepedia.com/Java_Edition_1.17

Just like with Optifine, but now through crafting, you can get a new item to zoom, and look into the distance to see just a little bit more. 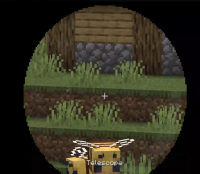 Get lost gold, shove off silver – there's a new precious (well, semi-precious but still sooo shiny!) metal in the Overworld! It's the time for the age of copper!
https://minecraft.gamepedia.com/Caves_&_Cliffs#Blocks

Excellent to protect your builds. You can now make sure your house doesn't go up in fire during a thunderstorm.
https://minecraft.gamepedia.com/Thunderstorm#Lightning

What’s this Steve? Bundles? What a nifty way to – well – bundle things together and carry several different items in one inventory slot. Of course, stack limits still apply! You can also leave your friends a bundle as a gift!

One of the coolest additions if you ask me. With a brush in hand and on a quest for lost knowledge: we bring you archaeology! What will you unearth from the past? Secrets, revelations, or maybe just a great pumpkin pie recipe?

The axolotl might easily be one of the cutest mobs we've ever added to Minecraft – don't even start us gushing about how adorable they look in a bucket! But looks can be deceiving, and this cutey is also a tough little predator.
https://minecraft.gamepedia.com/Caves_&_Cliffs

Woah, so much, I can't wait to test some snapshots as they come out between now and the Summer of 2021, and eventually upgrade our 1moreblock.com server

The event is over, we had fun on the voice chat, and Mojang published a re-cap here: https://www.minecraft.net/en-us/article/minecraft-live-the-recap