It's with great pleasure that I am announcing the biggest adventure we've yet to have in 2018 for 1.12.2, and that is all I am going to really say about it. You really have to stay tuned.

Sign up on the forums, subscribe to this thread to stay tuned, and be one of the lucky few soldi.., I mean players, that get to go on this last adventure of this year.

How to play, when to play, what it will be about, and all the details will be kept quiet for today. Check back in tomorrow. But hopefully this first post has given you a couple of hints.

Yes, there are conditions, and yes it will cost you some in-game money and in-game items in order to be eligible to play.

It's Sunday where I am now, so that means it's time to disclose a bit more information about this Adventure.

Nope, it won't be this weekend. But it will be this year, and probably soon enough. So let us know if you're interested!

This is an Adventure map for Minecraft 1.12.2, and it will keep you busy for a few hours. And yes, this time there's (limited) help one way or another. I don't want to disclose how just yet.

Friends! Are important.. don't play this map alone. You will have an easier time teaming up. And I believe you can play with up to four people. It's one of our conditions, you have to be /friends with eachother on the -live- survival server. There will be more conditions. Hint: start playing and collecting items, ask ilujf which type of items: she knows.

It's time for another update and a little bit more information.

More spoilers, and a bit more information about what to expect. Are you sitting down?

Yes, we will have the Friends Adventure on a weekend in September!. Okay, but what is it actually?

The Friends Adventure is a 1.12.2 World map made by an awesome guy and properly tested by his awesome team. It can be played by up to 4 players. And we support multiple instances. You can start completely fresh if you request to do so. You can play it again with other friends or alone. We recommend to play it with 2 or 3 players at once. Anyway. There is so much to do besides exploring the world, experiencing the adventure, and to find secrets with your friends. There are side quests, a conflicting story, there's bosses, custom mobs to battle. There are custom trades, custom builds, and custom traders. Oh, did I mention easter eggs? There's loads of stuff, see lava on the floor? Maybe right click on it just to be sure there's not a chest with loot hiding.

wait.. come back on the 29th to find out. I will be back here in this thread tomorrow to tell you the story and the role of the player.

As promised, today I will share the story and the role of the player, so here goes;

Story
The Dark and Light worlds, once, two realities coexisting peacefully, until one day the Light Kingdom was assaulted by dwellers of the Dark World. Crippled, the towns of which one ruined, the other twisted, are now aberrations. It could have only been a dark power that was behind the operation, that dwelled into the other world, seeking the energy of the light. A rift found between words, breached the barriere that once separated them.

The Hero, you
As a soldier of the Royal Guard, whom at the start of the adventure, must report to the King. He tells you about a weapon that shall has the ability to shatter the portal between the two worlds. But as he's speaking, the attack happens. You (and your friends) survive, but the King has vanished. As the Hero, you will traverse the Dark and Light worlds to find out who's behind all of this, and hopefully restore order.

Best of luck soldiers. Your adventure begins in September, make sure you are eligible, the first few requirements are now known; sign up on this forum, post to this thread. Play at least once on 1moreblock.com:25565, and collect enough items - ask ilujf which ones - and become a friend with at least one other player on the server.

Stay tuned, I will answer some questions and make a better list in the next few days.

RodolfoGiusti said:
I WANNA PLAAAAAY!!!!!
I do!
Click to expand...

you and prickly can perhaps play together this weekend?

Let me know if you want to try playing it tonight, or maybe have time Sunday, or next weekend.

Sorry for the delay, I have been a bit under the weather the last few days.

ilujf and her friend are starting an adventure instance soon. But I can start another instance if needed.

Entangled is going solo, giving the adventure a try

Entangled played a good hour, got kinda stuck on parkour, nice job, and I hope you had fun.

Two of my friends from the network started the adventure map together, best of luck! (ilujf will handle loot box payout there)

TidalDawn joined the Adventure and is giving it a go

A bit of feedback from a couple of people, so far

Tidal run into an issue, the Upgrade Master the sword+gold doesn't seem to be tradable.. we cant figure out how to fix this, ugh.

ImaPricklyPear11 has joined the adventure

we were able to fix the earlier reported issue, instances moving forward shouldn't have this problem. (best of luck entangled haha)

TidalDawn finished the adventure! An extra big loot box will be available monday or tuesday

Just to be clear, this adventure thing is still possible, you didn't miss it.. for the next handful of days you can join to play with you and your friend. just let me know. 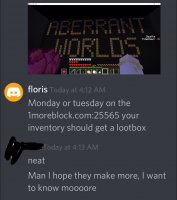 I was out with the new computer installation process taking longer than expected.

RodolfoGiusti said:
I was out with the new computer installation process taking longer than expected.

Officially the friend adventure is over, but since it's so easy for me to start an instance, and give players access. Feel free to ask me when you have time to play for a few hours. Also, you will still be eligible for the lootbox on the Survival server afterwards.

The conditions/requirements to play are due to time limits thrown out the door, so dont' worry about that, just post here or poke me in the game, or tag me in discord, and I will set things up real quick for you (and your friends).

Entangled, ilujf & friend, and @Tidal have received their lootbox today (sorry for the delay)

OCQueen101 said:
YASSSSS I'M SO EXCITED I JUST HOPE IT'S ON A WEEKEND IN THE US
Click to expand...

Sorry that you had such connection issues and limited access to your computer. When things improve give me a poke, I have no problem letting you play the adventure. I know how much you've been looking forward to it. Bring a friend!

RodolfoGiusti said:
I was out with the new computer installation process taking longer than expected.

I hope the problems are resolved, again, give me a poke on discord or anywhere that you want me to start up another instance, and i will give you the details where to connect to. And you and friends . (4 player total) can have an adventure. Remember, this is not a short one.

Globug100 has joined the adventure! She's the only running adventure-instance on port 55555